Years ago I owned my first Honda. It was a XL 500 S. It was fun getting more and more experienced in motorbike riding.
Ten years later I got back to Honda
buying my first new motorcycle, a Honda AfricaTwin 750 (Model RD07a). This AT was a "dream", we managed lots of highway, street and offroad miles together, overall more than 50.000 miles with just one problem (the petrol pump).
Loved that bike but promised to sell it after buying a lighter enduro bike (140kg vs. 230kg), so I did.
After a while I decided I would come back riding a big ADV bike and started looking around but did not find anything appropriate for years. I do not ike BMW, had bad experiences with KTM during the 90th.
But suddently Honda announced the new CRF1000 and I followed all campaigns and got caught :-)
The order was placed beginning of 2016, my DCT model arrived in March. Great ! 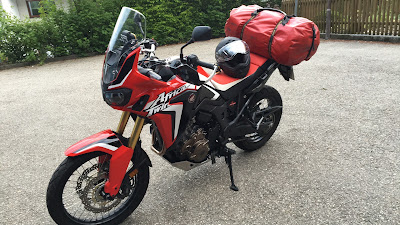 So I started using it on a daily base in April 2016, got rid of train tickets to go to work and commuted with my AT. Great bike, love it, easy to drive in the crowded city as well as in light offroad terrain.
Lots of things needed improvement like heating grips, engine protection bars and plate, higher handle bar and mount for navigation. So I did all that and in summer 2016 I thought this is the bike to grow old with :-).
But Honda had different planes. At around 14200 km the engine started making bad noise in all revs. Telling this at my dealers when dropping the bike for the 12000km inspection just earned a "no AT client complained about that so far". But no matter what Honda let them exchange the main shaft where the dual clutch is located on.
Additionally they exchanged the left switch unit due to the "Set Switch Problem" and front and rear wheel due to the "Sprockets Problem".
This took about a week but that was fine because we had snowy and icy weather during that time and I did not intended to drive during that weeks.
Then I picked it up, the noise continued in the same manner but dealer and Honda stated everything to be fine / OK.
So I left with a newly inspected and repaired engine producing louder mechanical noise than normal engine sound.
500km later on a central highway cross near Munich my AT decided to produce a big bang at around 160km/h, DCT controller immediatly decided to pull the clutch and leaved it at such.
Rolling to the highway side I had a well sounding engine but a DCT controller which could not be talked / set / forced into normal working state anymore.
I was not happy but not yet pissed because I knew it is always a risc buying first series products.
So my AT and I showed up at my dealers next morning around 9:00, by car (not my favourite) with my AT on a trailer.
My dealer offered a small Vespa type thingy during the repair period but I denied it because I do not want to commute with something like that on a german highway into Munich all day. I do not want to be "victim" on the highway.
After 10 days no hear and my dealer telling me "we wait for Honda Germany" I contacted Honda Germany Customer Service. Got no answer at all !
After 12 days (so 2 days later) my dealer told me Honda decided they want the defective engine, so my AT will get a replacement engine. But it will take 10 to 12 days for the engine to reach Germany. Just as a remark: our production team manages to get parts from Taiwan to Munich in 3 days !
But back to Honda, still no offer for a different bike during that time, no offer for any other compensation, no contact from anybody of Honda Customer Support Germany.
After all it took Honda 4 weeks and 1 day to replace the engine in my AT as a warranty case and they still believed everthing worked at its best.
Only contacting managers from HONDA EUROPE enforced somebody to contact me and discuss what went wrong during that support case and why.

Although I still love the bike and it is the best bike I have ever had sofar I decided to sell it because I cannot identify with a poor customers service and support provided by Honda Germany.
And exactly those would be the ones I end up dealing with in case any other case pops up at my AT.